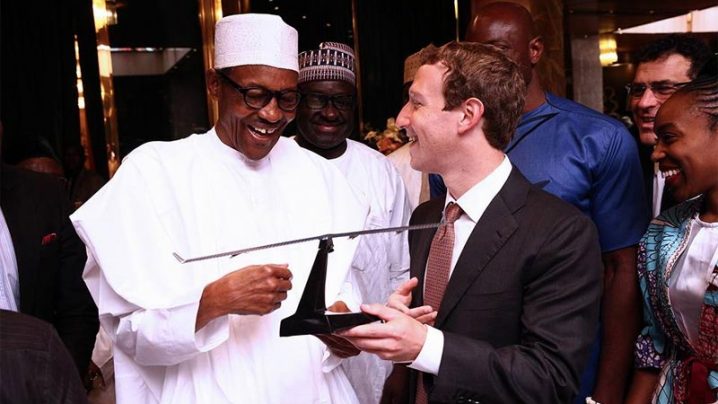 Facebook founder and CEO Mark Zuckerberg on his first ever historical visit to sub-Saharan Africa, predicted the future of the world to be built on the African continent.

On Aug 30, Africa in particular Nigeria, witnessed one of the greatest men whose innovation changed the course of social media. Therefore, Mark’s visit was by far one of the most motivations for young entrepreneurs and those in tech and I.T businesses.

Upon his arrival, Mr. Zuckerberg praised Africa and said that “the future of the world will be built on the African continent”. He was by no doubt, electrified by the waves of energy, determination and enthusiasm of the entrepreneurial spirit in Lagos.

His arrival in the midst of multitude of facebook funs, young, and adults, including the media, changed the whole atmosphere of the Lagos, Nigeria. He stressed a point by saying “in any case if you’re trying to establish something of value, what you should put under consideration, is to locate it where it’s valued and appreciated most. Thus, this is where the future is going to be built”.

While smiling, he emphasized in his tone that once the world woke up to the entrepreneurial energy coming from Africa, the continent would change the world.
He pointed out that, “here the moment you land the plane and start talking to different people, you feel the vibe, the strong passion and entrepreneurial spirit”. Mr. Zuckerberg went ahead to say, his surprise visit to Nigeria, the facebook fanatic and largest African market, with well over 18,000,000 customers, was to focus more around entrepreneurship and web development.

He spoke positively about the internet, emphasizing the point of accessibility as a major priority for all. He had a lengthy talk whereby he mentioned facebook’s key priority projects which aimed at connecting developing world / communities to the internet. Among such projects are; Free basics aimed at providing people with access to basic services on their mobile phones, especially in areas where internet accessibility is beyond reach. He however, mentioned South Africa as an example, where such services could be accessible. For instance, by Cell C network. His emphasis basically focused on making the internet an essential tool for development.
“I think the internet is one of the most important and fundamental part of infrastructure; for development, business start ups, smooth running of the business and so on. The world feels more connected and secure today with the internet than any time in history, families and friends are easily accessible”, Mr. Zuckerberg said.
A good example of that fact is, “businesses are making good returns with less input. The growth of small and medium businesses which have benefited from the free tool of opening up facebook accounts. So far, approximately 60 million businesses have facebook pages, with thousands joining every day. If it wasn’t for facebook, such wide coverage services would only be accessible by big companies and organizations”, He added.

How Mr. Zuckerberg Explored his Visit to Nigeria

The facebook founder, as he landed in Lagos on Tuesday, 30 Aug, he met with local businesses and developers in an effort to focus more on how facebook would better support and motivate start ups and entrepreneurship drive across the continent. That was the statement from one of the companies he visited.

Mark Z visited, among others; Yaba, commonly known as the “Silicon Valley of Nigeria”. He toured the kids’ camp and met many other local start up founders and developers at a local innovation centre [CCHub]. There was no doubt that here Mark Z encountered enormous energy of entrepreneurship from the young stars and the adults alike. He showed the positive response by saying, “he just feels like walking around and find buddies”!

Wherever Mark Z walked, he drew loud cheers from whoever caught a glimpse of him.

Mark Z has been credited for his increasing participation ofAfrican initiatives this year. His foundation [Chan Zuckerberg Initiative] in june contributed millions of dollars in Andelaproject, which trains African software developers, where it gave them full roles to compete at global level.
The project’s headquarters are in Lagos and Nairobi Kenya.

It was noted that Mark’s visit brought too much hope and anticipation to Nigerians’ progressive entrepreneurs, which simply means they’ve got what it takes to compete and succeed on the international scale of tech businesses.

Another notable achievement by Mark Z is Free basics, which gives internet to mobile phone users in countries with inadequate internet accessibility. For instance, Kenya, Zambia and so on. And now is expect to increase its coverage to other African countries including Nigeria.

Mark Z also made a surprising visit to Nairobi. Like in Lagos, his visit to Kenya’s capital mainly centered around meeting with entrepreneurs and developers and perhaps more importantly, to learn about mobile money, where Kenya is praised to be the world leader. Mobile network is a force to recon with in Kenya, as many things are being performed on mobile phones, including access to social media.

While he was in Nairobi, Mark Z started at iHub where entrepreneurs can build and prototype their ideas. He also met with some engineers who designed a system to help people use mobile payments. It was mainly designed to buy small amount of cooking gas, which is eco friendly compared to charcoal and kerosene. To Mark Z it was quite fascinating to see how engineers in Kenya use mobile money to build businesses which have uplifted the status of the locals.

The facebook billionaire also visited Nairobi to check on Andela, the organization which is sponsored by ChanZuckerberg Initiative. Andela has its headquarters both in Lagos and Nairobi and it was a beneficially of a multi-million dollar investment from Mark Z. It is also a two year old start up that trains African software developers and give them full time roles at international companies.

However Mark’s Nairobi visit was a short one compared to Lagos. One spectator complained as he tweeted, “Kenya is losing its place as an ICT hub and Nigeria is taking over”. “Verysad for Kenya, there was a time we were the first stop”, tweeted another. “This is a lesson that we need to get our house in order”, stated yet another who seemed not impressed at all!